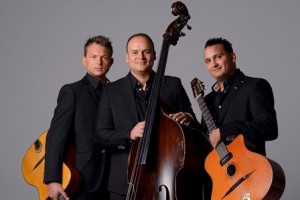 ‘THE ROSENBERGS’ MASTERS OF SWING

form a high octane, talented trio,  the younger generation of the legendary Rosenberg-family;

‘The Rosenbergs’, with the apt tagline of ‘Masters of Swing’.

Two nights only in London with this brief flying visit from the international stages of Europe, these stars will deliver a night to remember, toe tapping rhythmic swinging genius, the Rosenbergs serve up a feast of romantic vocals and swinging Gypsy jazz, with modern edginess and traditional hot standards, from the repertoire of Django Reinhardt, with new and fresh  arrangements, accommodating the seductive velvet vocal tones of the talented singing crooning red hot rhythm player, Johnny Rosenberg, hang on to your hearts girls!.

Like his fellow musicians he began playing the guitar at a very early age, touring with the legendary Jimmy Rosenberg in the Gipsy Kids and Sinti, supporting such artists as James Brown and Mariah Carrey. The other lynch pin in the rhythm section is stonking express bass player Sani van Mullem who also toured as part of the Gipsy Boys. His phenomenal bass lines and instinctive skill, demonstrated  on the ‘Ready ‘n Able’ album, recorded with Mozes and Stochelo Rosenberg.

Mozes Rosenberg, master lead guitarist, a greatly desired musician by many around the globe, often seen alongside his famous brother Stochelo, of the Rosenberg Trio. This band has