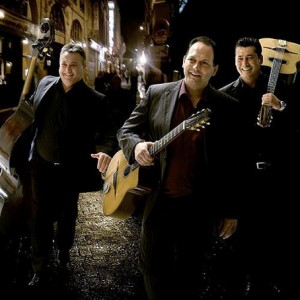 There is no exact date when the Rosenberg Trio began playing under that name. Two of the Rosenbergs, Nous’che and Nonnie, are sons of Sani Rosenberg, a musician in the Dutch Gypsy community. Nous’che started playing with his cousin and buddy, Stochelo Rosenberg, when Stochelo was about 10 years old. In 1980 Stochelo and his trio were awarded the prize for best musician at a child’s musical contest on dutch television, and since then the trio has been constantly on the rise, on a course that has now taken them worldwide to play on the most reputed stages, including a show at New York’s Carnegie Hall for legendary violonist Stephane Grapelli’s 85th birthday celebration. The Rosenberg trio’s discographic debut, “Seresta” was the start of a series of albums.