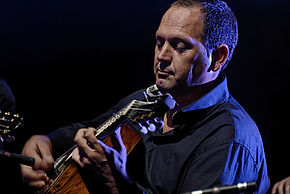 Dutch guitarist Stochelo Rosenberg is not only one of the best representatives of gypsy jazz, but also an undisputed icon.
he started an international career after his first album “Seresta” (1989).
His brilliant and striking virtuosity, as well as his extremely melodious playing make the eyes of all guitarists in the world sparkle. Stéphane Grappelli, grand master of the violin and partner of Django Reinhardt for many years, hired Stochelo in 1993 for a concert at Carnegie Hall, then for tours around the world.

Stochelo Rosenberg was also hired to record the soundtrack for the award-winning film “Django”, which hit theaters in 2017. He did so with rare authenticity.