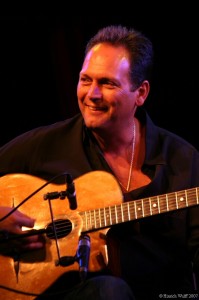 Since 2005, Stochelo Rosenberg (guitar) and Christiaan van Hemert (violin) have been regularly collaborating on many different projects, from concert tours to teaching workshops. In 2011 they started a very successful on-line gypsy jazz learning platform Rosenberg Academy. Both Stochelo and Christiaan share a deep love for the early recordings of Django Reinhardt and Stéphane Grappelli and they enjoy recreating some of the original arrangements of the Hot Club de France.

Stochelo Rosenberg
Born in a Dutch Sinti Gypsy camp, Stochelo started playing guitar at age 10. His teachers were his father, his uncle and the records of Django Reinhardt. When he was 12, he and his band won first prize in a Dutch national children’s TV-contest and never looked back. Today, he is a world renowned ambassador for gypsy jazz and one of the most popular, in-demand guitarists in the world. He won countless awards, played and recorded with the biggest names across many styles.

Christiaan van Hemert
He studied violin and double bass at the Utrecht, Rotterdam and The Hague conservatories and graduated with honors for both instruments. He has produced and participated in countless concerts playing with – among others – the Rosenberg Trio, Mozes Rosenberg, Roby Lakatos, Tchavolo Schmitt and Juan José Mosalini and was the conductor/arranger of his own symphonic orchestra for several years. He is also a well known tango bandoneón player and bluegrass instrumentalist. Besides a busy concert schedule he also teaches jazz violin in the master department of the Rotterdam Conservatory.