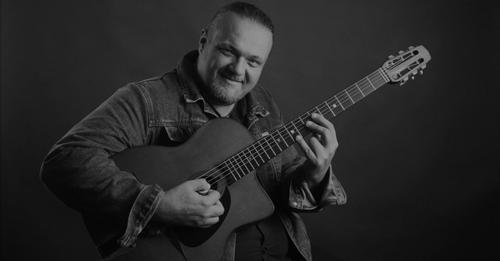 Damir Kukuruzović, jazz guitarist, winner of numerous music awards and the most prominent Croatian representative of music Django Reinhardt, abruptly left us in December 2020, leaving behind a rich musical legacy and his Django Group, which he founded in 2005 and have been indispensable since then part of all relevant festivals at home and abroad.

Kukuruzović himself was one of the guitar virtuosos who, with exceptional playing skills, managed to reach the highest aesthetic level.

He has collaborated with the greatest musical virtuosos of today: Stochel0 Rosenberg, Robin Nolan, Angel0 Debarre, Raphael Fays, Ludovic Beier, Paulus Schäfer, Wawau Adler, Yorgui Loeffler, Joscho Stephan, Gismo Graff and many others. It was Robin Nolan, Gismo Graf, Sinan Alimanović and Paulus Schäfer who were guests on his latest album “Smile”, which saw the light of day in August 2021.
He previously recorded the CD “Green Hill Gypsy Swing” with the legendary Angelo Debarre, “Manouche” with Ludovic Beier, “My Django Family” with Wawau Adler and Vlatko Stefanovski, and in 2019 he released a CD and vinyl with Zoran Predin “Zoran sings Arsen” accompanied by his Django Group and Matija Dedić.

His band continues to tour throughout Croatia and abroad as DAMIR’S DJANGO GROUP.

Leading Dutch guitarist Paulus Schäfer will be a guest at the promotion of the album in the Vatroslav Lisinski Concert Hall, along with numerous guests with whom Damir Kukuruzović has collaborated during his career.